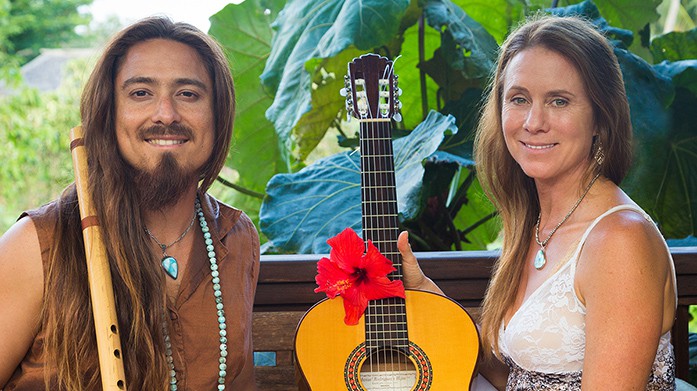 Jaya Lakshmi and Ananda are Oregon based musical artists in the genre of mantra music. The offer a combination of kirtan (call and response singing), bhajan (devotional hymns) and original singer/song writer compositions in the languages of English, Sanskrit and Gurbani. Alternating guitar, harmonium, keyboard, bansuri flutes and vocal weaving, they create a profound healing and balanced sound current (Naad) brimming with bhakti (devotion).
Since their coming together in 2010, they have released 4 albums on Sounds True as well as 6 independently. They tour nationally and internationally holding their own events and retreats. In addition, they perform and teach at festivals and regularly offer Kirtronica at ecstatic dances. They have been pioneers in bringing music and conscious businesses together, especially on their USA west coast tours. Their sponsors this year include Coconut Bliss, Jem Nut Butters, and Medicinal Foods.
Jaya Lakshmi’s largest influence in the realms of mantra, kirtan and bhakti came from her connection with the Guadiya Vaishnavs, otherwise known as the Hare Krishna’s. She was initiated in 1992 by Srila Govinda Maharaj and lived on and off in ashrams and likeminded communities for years afterwards. Jaya Lakshmi began sharing her beautiful kirtans in 1992. Since then she has four solo chant albums on Sequoia Records. In addition, Jaya Lakshmi was the lead singer to the highly influential tribal techno band Lost at Last before their break up in 2003.
Ananda’s main influence comes from the Kundalini Yoga tradition and teachings of Yogi Bhajan. He has been a dedicated practitioner and teacher for over 10 years and has studied with many of the great teachers of that lineage. He also completed and taught at numerous holistic yoga and leadership immersions at the Dharmalaya. (Dharmalaya is a holistic yoga, permaculture and meditation center in Eugene, Oregon, that is part of Ananda Seva.) In addition to his BA in international and sustainable business, he has a minor in East Asian Religions and studied yogic philosophy at the University of Oregon.
www.JayaLakshmiAndAnanda.com
Page load link
Join the Mailing List